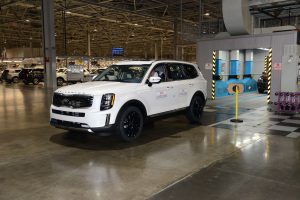 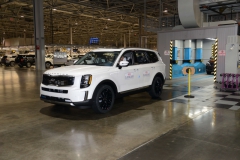 Representing an investment of more than $1.1 billion, KMMG began mass production on Nov. 16, 2009 and today produces more than 40 percent of all Kia vehicles sold in the United States.

“Producing three million vehicles in less than 10 years is another example of the commitment and results of the KMMG Team’s ‘One System, One Team’ philosophy,” said KMMG President and CEO Jangsoo (Jason) Shin. “The world-class quality that goes into every Telluride, Sorento and Optima we build is a direct result of the hard work and dedication of our team members, and today we salute their commitment to excellence.”

KMMG, which will celebrate its 10th year of production later this year, has consistently been recognized for the outstanding quality, reliability and performance of its Kia products in evaluations and reports by J.D. Power & Associates, Consumer Reports, the National Highway Traffic Safety Administration (NHTSA), the Insurance Institute for Highway Safety (IIHS) and a variety of media outlets.

“KMMG is an outstanding example of hardworking Georgians performing at world-class levels,” said Georgia Governor Brian Kemp. “The company’s continued investment here is yet another result of our pro-business atmosphere, and I am proud to see KMMG’s relationship with the State of Georgia continue to strengthen. I want to congratulate Kia’s team members on the latest of many accomplishments.”

Kia Motors Manufacturing Georgia, Inc. (KMMG) is the first manufacturing site in North America for Kia Motors Corporation based in Seoul, Korea. With an annual capacity of 340,000 units, KMMG is located on 2,200 acres in West Point, Georgia, and began mass production on Nov. 16, 2009. KMMG is home to the Sorento SUV, the Optima mid-size sedan and the Telluride SUV.