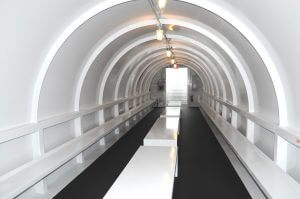 “While we hope we never have to use them, the weather is sometimes unpredictable and can change instantly,” said Randy Jackson, senior vice president of human resources and administration for KMMG. “With that in mind, and storms that have hit nearby, we want to ensure that team members will be safe onsite in the event of disastrous weather.”

KMMG has installed 10 underground storm shelters, placed near each of its buildings, that can hold up to 100 team members per unit. The state-of-the-art units include chemical restrooms and generators that provide lights and forced air circulation.

Kerry Franks, assistant manager of the Facilities Department at KMMG, said based on the number of team members and suppliers onsite per shift at KMMG, the underground shelters and interior shelters inside each building will provide adequate space for everyone in the event of a storm.

“More than anything, we value people as the heart and soul of our company, and we put a priority on safety,” Jackson said. “We will continue installing additional underground storm shelters in the coming months.”