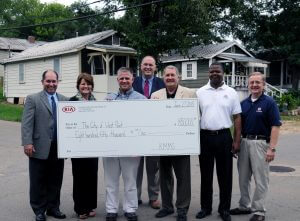 “We are so proud to call the City of West Point our home and look forward to many successful years to come,” said Randy Jackson, KMMG’s vice president of human resources and administration. “Kia is committed to making a difference in this community because the city is a critical partner and we owe our success to the unwavering support and spirit of partnership with the region.”

Today’s contribution is the first part of KMMG’s $6.65 million commitment to the city over the next several years.

“The City of West Point is thankful for KMMG’s support of our citizens and our community revitalization efforts. This contribution of $850,000 to the City of West Point and the West Point Development Authority is substantial and meaningful,” said Ferguson. “The majority of these funds will be directed at the areas defined by the 10th Street Redevelopment Plan and will be the largest investment made in a part of our city that greatly needs it. This contribution illustrates Kia’s commitment to improving this community for everyone.”