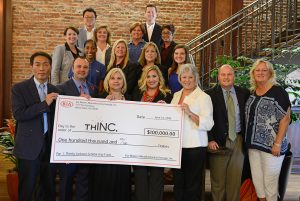 “Randy was truly a visionary leader that was so instrumental in the launch of the THINC College and Career Academy,” said THINC CEO Kathy Carlisle. “He had an extraordinary commitment to developing workforce and improving the lives of students throughout our region. This scholarship will be a lasting tribute to the true catalyst for bringing THINC to Troup County.”

Jackson passed away on Friday, May 20 after leading KMMG through its construction phase, the hiring of more than 3,000 team members, the plant’s expansion of production capacity, multiple successful vehicle launches, the grand opening of THINC College and Career Academy and numerous other projects.

“Randy’s contributions to KMMG during the past nine years are immeasurable and will be felt for decades to come,” said KMMG President and CEO Hyun-Jong Shin. “His commitment to workforce development and improving the lives of citizens throughout KMMG’s region will be an enduring legacy.”

This special THINC scholarship was created in Jackson’s memory to honor his legacy of dedication and tireless effort toward promoting workforce development and increasing graduation rates.

“This scholarship is a wonderful tribute to my father and will leave a lasting impression of his great accomplishments while providing financial assistance for this region’s workforce of tomorrow, a group that he took so much pride in helping,” said his son, Jamey Jackson.

Contributions to this special scholarship may be made to the THINC College and Career Academy for the J. Randy Jackson Scholarship Fund (One College Circle, LaGrange, Ga. 30240).