“We are incredibly proud of the Kia Motors Manufacturing Georgia Team for launching another excellent product right here in the Peach State,” said Kemp. “As Georgia’s Governor, it was an honor to attend today’s ceremony, celebrate KMMG’s workforce, and commend them for their commitment to innovation, quality, and growth. Today’s launch of the Telluride, a product that will be made exclusively here in our state, is a remarkable milestone for Georgians.”

The Telluride is joining the award-winning Sorento SUV and Optima mid-size sedan on KMMG’s production line.

“The addition of the Kia Telluride to KMMG is further evidence of our commitment to the U.S. and local economy,” said Yoon. “This vehicle was imagined and designed specifically for the United States in our Kia Design Center in Irvine, California and is now being assembled here in West Point. There is no doubt that the world-class quality and attention to detail of the Telluride will be second to none.”

About KMMG: Kia Motors Manufacturing Georgia, Inc. (KMMG) is the first manufacturing site in North America for Kia Motors Corporation based in Seoul, Korea. With an annual capacity of 340,000 units, KMMG is located on 2,200 acres in West Point, Georgia, and began mass production on Nov. 16, 2009. KMMG is home to the Telluride SUV, Sorento SUV, the Optima mid-size sedan. 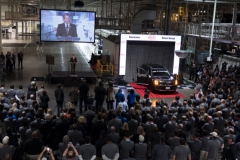 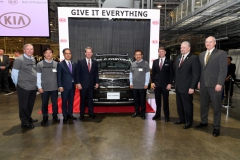