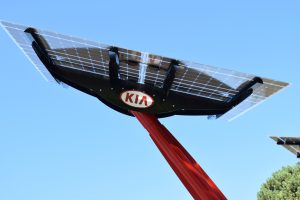 (LaGrange, GA, November 28, 2017) — Kia Motors Manufacturing Georgia (KMMG) delivered a significant financial contribution to The Ray, Georgia’s living laboratory for transportation technology on Interstate 85, on Giving Tuesday. The $26,000 gift is the second installment of a three-year commitment for the WheelRight® tire safety station, installed in December of 2016 at the Georgia Visitor Information Center on The Ray at mile marker one. It is still the world’s only drive-over tire pressure and tread depth monitoring station that is publically available.

“We are proud to partner with The Ray and contribute to the safety of drivers coming into Georgia,” said Stuart Countess, KMMG’s chief administrative officer. “Kia is committed to safety, and we hope that by making this contribution on Giving Tuesday we can continue to raise the public visibility of this potentially lifesaving project.”

“Saving lives is our top priority,” said The Ray president and founder, Harriet Langford, “KMMG’s support of The Ray makes pilots like this possible. Together, we’re proving that technology exists today that can address dangerous driving and road conditions that are totally predictable and preventable. When I think about what we can do to give back to our community, I can’t think of anything better than making our cars and roads a safer place for our loved ones. We are so grateful for partners like Kia who share this passion.”

In 2016, Georgia had 1,521 fatalities on its highways, 90 more deaths than in 2015. This marks three consecutive years of increased highway fatalities in Georgia. The National Highways Transportation Safety Administration estimates 41 vehicular-related deaths annually resulting from tire blowouts and underinflated tires. Approximately one in four automobiles and one in three light trucks on US roads have at least one tire underinflated eight pounds per square inch, or more, below the recommended level. These statistics add up to tire underinflation being the single most common factor in tire failure, according to the International Tire and Rubber Association. In addition to safety concerns, underinflated tires wear down faster, cutting approximately one year off the life of a set of $400 tires.

“Improperly inflated and worn tires impact vehicle performance characteristics, especially in the area of safety, when confronted with a hazard such as weather or debris,” said Countess. “At KMMG, we have a continuous improvement mindset – we are always looking at innovative solutions to further advance the safety in vehicle mobility. The opportunity to partner with The Ray on a test site for WheelRight® is one way we can learn more about how to improve safety on our roadways.”

Since it’s installation in December of 2016, over 2,500 drivers have had their tire pressure, and tread depth checked. “These results from only one year of implementation on The Ray have immediate results for drivers using WheelRight®,” said Langford, “not only are they driving in a safer vehicle, but properly inflated tires put money back in their pockets. Underinflated tires reduce a car’s fuel economy, which is bad for our wallets and bad for the environment. The Department of Energy estimates that drivers who fill up a 15-gallon tank once a week would save $93.60 a year if they kept their tires properly inflated.” As a result of the installation and operation of WheelRight® on The Ray, a working interstate, we are aware of state departments of transportation as well as private companies that are evaluating the technology for broader deployment in the United States.

The installation of the WheelRight® tire safety system is the second major financial investment that Kia Motors America (KMA) and KMMG have made to advance and demonstrate cutting-edge technologies on The Ray. In 2015, KMA financed the installation of the Southeast region’s first Level 3 electric vehicle charging station powered by a solar array, otherwise known as PV4EV, at the Georgia Visitor Information Center in West Point.

The Ray is a proving ground for the evolving ideas and technologies that will transform the transportation infrastructure of the future, beginning with the corridor of road that is named in memory of Ray C. Anderson (1934-2011), a Georgia native who became a captain of industry and was recognized as a leader in green business when he challenged his company, Atlanta-based Interface, Inc., to reimagine the enterprise as a sustainable company—one that would pursue zero environmental footprint. Chaired by Ray’s daughter Harriet Langford, The Ray is an epiphany of the Ray C. Anderson Foundation. Learn more at www.theray.org.

Kia Motors Manufacturing Georgia, Inc. (KMMG) is the first manufacturing site in North America for Kia Motors Corporation based in Seoul, Korea. With an annual capacity of 360,000 units, KMMG is located on 2,200 acres in West Point, Georgia, and began mass production on Nov. 16, 2009. KMMG is home to the Sorento CUV and the Optima mid-size sedan, two of the brand’s top selling models in the U.S. Learn more at www.kmmgusa.com.

WheelRight, located in the UK on an Oxford University technology park, was established with a vision to research, develop and commercialize technologies to automate the inspection of tires on any vehicle whilst the vehicle is in motion. Ease of use, accuracy and simplicity are key design criteria for the web-based cloud system.The integrated, cloud technology is working 24/7 in bus and HGV depots across the UK for a range of customers and tested extensively by Highways England. Learn more at www.wheelright.co.uk.