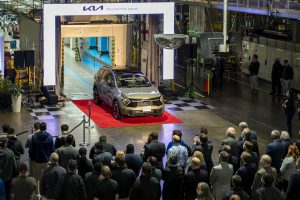 (West Point, Ga.) February 1, 2022 – On Tuesday, the Kia Georgia team officially began production of the all-new 2023 Sportage subcompact SUV at the plant’s facility in West Point, Georgia. Sportage, Kia’s longest running nameplate, has undergone its most significant changes to date as part of Kia’s “Movement that inspires” transformation. Savvy and adventurous, the celebratory Sportage was jungle green in color with the X-Pro Prestige trim package. The vehicle was introduced by Sean Yoon, president and CEO for Kia North America, and then driven off of the assembly line by Georgia Gov. Brian Kemp and James Watson, Kia Georgia’s vice president of production.

“It was an honor to be here today for this milestone achievement by the Kia Georgia team,” said Governor Kemp. “The Sportage is yet another great product built in Georgia, and its launch here in West Point is a proud moment for our state. I congratulate all of the great Kia Georgia team members for their continued commitment to quality and growth, and thank them for bringing more opportunity to the No. 1 state for business.”

“The launch of Sportage in Georgia is a further testament to Kia’s longstanding dedication to the U.S. market and the local economy,” said Yoon. “Joining our tremendous fleet of SUVs, the all-new Sportage is poised to take the industry by storm with its cutting-edge design, adventurous capability and desirable in-car technology. Coming off a record-setting sales year in 2021, today’s launch adds further momentum to the Kia brand’s fast start in 2022.”

Stuart Countess, president and CEO of Kia Georgia, credited the Kia Georgia team’s long history of success and its reputation for quality as big factors in the ability to add a fourth model.

“The Kia Georgia team as a group is second to none and has been producing award-winning vehicles for more than 12 years,” said Countess. “Today’s ceremony is another phenomenal accomplishment by the Kia Georgia team and I hope that each team member will take a lot of pride in being a part of this special day.”

Kia Georgia, Inc. is the first manufacturing site in North America for Kia Corporation based in Seoul, Korea. With an annual capacity of 340,000 units, Kia Georgia is located on 2,200 acres in West Point, Ga. and began mass production on Nov. 16, 2009. Kia Georgia is home to the Telluride SUV, Sorento SUV, Sportage SUV and the K5 mid-size sedan.