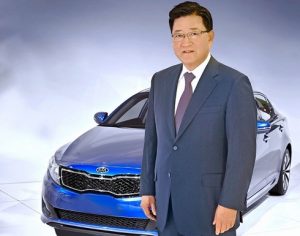 (SEOUL) March 18, 2014 – Kia Motors Corporation announced today that Byung Mo Ahn has been promoted to Vice Chairman of the global automaker.  In his new role as group vice chairman and CEO of Kia Motors America (KMA) and Kia Motors Manufacturing Georgia (KMMG), Mr. Ahn will continue to lead the implementation of the brand’s long-term strategy in the U.S. as the product portfolio, customer base and units in operation continue to expand.  He previously served as the group president and CEO of KMA and KMMG since 2008.

During Mr. Ahn’s tenure, Kia’s U.S. sales have nearly doubled and the West Point, Georgia-based manufacturing plant, which began production in 2009, has produced more than 1.2 million vehicles. In 2013, the Optima midsize sedan assembled at KMMG was KMA’s best-selling vehicle and set an all-time, single-nameplate annual sales record for the brand at 155,893 vehicles, while sales of the iconic Soul urban passenger vehicle increased for the fourth consecutive year.

2014 marks Kia’s 20th anniversary in the U.S., and Mr. Ahn’s promotion furthers the organization’s efforts to concentrate on quality, strengthen the brand, elevate the ownership experience and identify new segments for growth.  Following the launch of the Cadenza premium sedan in 2013, KMA is currently introducing the K900 luxury sedan, which signals the beginning of a new era for the brand in the key global market of the United States.